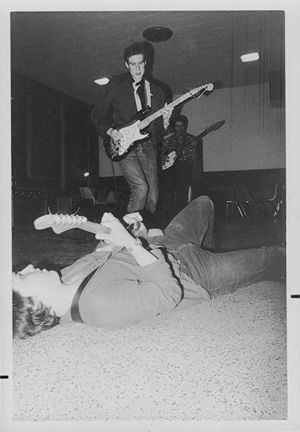 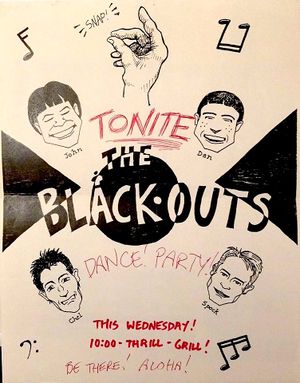 A poster for The Blackouts, with art by Flansburgh

The Blackouts was a band in which John Flansburgh played guitar while he was in college, before the formation of They Might Be Giants. Flansburgh was in the band while attending Antioch College, in Yellow Springs, Ohio. His years in Ohio were the source of the reference to Xenia in "Out Of Jail".[1] The other band members were Dan Spock (guitar), Chel White (drums), Dan Julty (bass), and, at some point, Karl Hecksher, who had also played drums for The Turtlenecks.

Very little is known about the type of music the band played, but in a radio interview, Flansburgh stated, "I was in a band called the Blackouts. We did, uh...we did some really messed up stuff. We did a bunch of James Brown covers that were un-identifiable as James Brown covers. I was playing the role of James Brown." John Linnell added, "John just basically screamed."

One of the James Brown covers in question was "I Can't Stand Myself". Other songs performed by The Blackouts included "Sweet Pea" by Tommy Roe and an original surf/funk instrumental called "Two Points".

Flansburgh claims that the income from a gig with The Blackouts made him realize that he could play in a band professionally:

In college, I was in this band called The Blackouts with another friend of mine from high school, and we were playing at this place in Dayton, Ohio called Walnut Hills. There was this really big turnout, like a lot of college bands. I can’t remember how much we made — I think we might’ve made $350 or $400 — but I remember being in the dressing room after the show, thinking, “Okay, if we made this much money in one night and we play four nights a week...” It’s not like were were ever going to play four nights a week, but it suddenly seemed much more plausible that you could actually make a living being in a band.[2]

In an interview with Smash Hits on April 4th, 1990, Flansburgh talked briefly about The Blackouts:

I was in this band at college called The Blackouts and I was wearing pyjamas. I was 20 years old.

A few other bands going by the name "The Blackouts" have also existed through the decades, including Frank Zappa's first band, and a Seattle/Boston-based band that at one point included Paul Barker of Ministry. However, the group Flansburgh was involved in was one of the less notable among these, and ostensibly unrelated to those aforementioned.