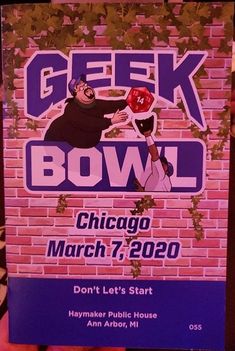 During Geek Bowl "In Memoriam":

They Might Be Giants
Aon Grand Ballroom in Chicago, IL
March 7, 2020

Review by Mrsbluebeard:
During Round 2 of the Geek Bowl, They Might Be Giants performed snippets of popular songs with parody lyrics about the state capitals which their original songwriters were from. These snippets served as the questions for that round of the quiz (participants had to identify the original song title and the state capital described in the lyrics). The songs were:

These songs were immediately followed by Set 1.

"Istanbul" included opening solo by Curt on trombone and trumpet. The "Spy" improvisation used the "Now the Night Has Gone" sample that Linnell used during the 2018 tour. Both of these differed from their performance at The Vic the night before.