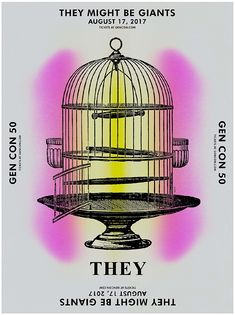 They Might Be Giants
Bankers Life Fieldhouse in Indianapolis, IN
August 17, 2017 at 8:30 PM

The performance was for Gen Con 50. I've been going to Gen Con for 3 years and my favorite band just so happen to be playing this time. I'm finally gonna see them live! It was also my first time meeting another wiki user in real life, Scarlet Swordfish. During The Guitar there was this long conga line. I'm more of a mosh pit guy but hell, any excuse to get to the floor. Invisiblehippo97 (talk) 10:25, 18 August 2017 (EDT)


Yep I was there too! Also been going to Gen Con for a few years and this was my second time seeing the band. The arena was packed. I was in the bleacher seating pretty close to the left of the stage. I was disappointed that I wasn't able to get a floor ticket, I hate sitting down at rock concerts. Flans said he didn't think they'd ever played for such a big crowd before (I have no idea if this is true). He had us do a continuous crowd wave around the whole arena for about two minutes. It was a good show and a very cool event for Gen Con's 50th anniversary, despite their admission that they knew nothing about the convention. Linnell joked that "We're so old, back when we started playing, dungeons and dragons were separate genres."

After the show I got Flans' signature on a Dial-a-Song sticker, and said hi to Invisiblehippo97. Then stopped in a White Castle for some water because I was dehydrated. --Scarlet Swordfish (talk) 13:36, 20 August 2017 (EDT)