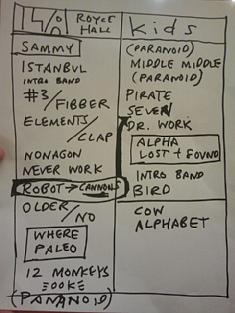 What an amazing show. This was my second show, and the first for my dates: my six-year-old son and ten-year-old daughter, and a family friend who was kind enough to drive my spawn home so that I could remain at Royce for the evening show. I was in the front center with my daughter, and my son was dancing like a maniac for most of the show. He was completely engrossed in the music...until the confetti cannons went off. Then it all went to hell, but he had a blast so distraction notwithstanding, it was an unforgettable day for both kids. Marty was hilarious during Alphabet Lost and Found. I was bummed at the lack of leap in Dr. Worm (and maybe not leaping jinxed Danny, who almost inadvertently "leaped" into the left side of the audience during the evening show). A fist-bump from Flans and the chance to strum his guitar made it particularly special for my son, who deemed it his "most rocking day ever."

Second song was "Number Three," which I certainly didn't expect at a kids' show. Not that it's inappropriate or anything, just that it doesn't seem like one of the super-happy sounding ones that kids would really enjoy (e.g. "Birdhouse in Your Soul," "Doctor Worm"). Awesome to see it again though.

JF: This song was written before anyone in the audience was born. You may not be able to tell from our extensive Hollywood plastic surgery, but everyone in the band is over 100 years old.

After that Flans said that they were all "celebrating our birthday together as a band" and he and John said "Happy birthday, John!" to each other and it was cute. Then Flans said that it was appropriate because "this next song is all about fibbing, which is a polite way of saying 'lying.'"

So then of course they did "Fibber Island," and there's that part at the end where The Johns are making silly noises and moving their fingers against their lips. After that Flans said, "That's how that song ends every time. We've thought about changing it, but we practiced so hard to get it exactly like that."

JF: A few years ago we did this album about science. (cheering) I see we have some members of the scientific community in the audience. We want to thank you for doing your part so we don't have to. This next song is about elements, it's about the periodic table, and it's all true.

So then "Meet the Elements," my hands-down fav kids' song. It was better than it was the night before because John did the holding up four fingers when he says "four elements" thing (both times!) and it's SO adorable when he does that.

Next was "Clap Your Hands," and yeh I'm not into that song as an adult, but I know it's not written for me and man the kids were really into it. I was giggling cos I was thinking about how Flans sometimes says "Shit!" when they do it at adult shows and I found the idea of him accidentally doing it at a kids' show very amusing.

After that Flans said the next song was much more low-key and required just "a microscopic New Wave dance with your elbows against your sides," and he demonstrated by holding his arms against his sides and twisting from side to side just a tiny bit. Then he said that the next song was "Nonagon" and that John was going to explain what it was about.

JL: This song is about a polygon, which is a shape with a certain number of sides. Hey, wake up! I'm still talking. JF: We've locked the doors. JL: You can't leave until you understand what this song is about...No it's ok. You can just do the New Wave dance.

Flans introduced "Seven Days of the Week" as being "the musicians' national anthem." After they did it John said, "It's so true. It's embarrassing to admit it but it's actually very true." And I was like "Yeh, especially for you since you let Flans do pretty much all the work, YA BUM."

After that Flans was going down the edge of the stage, where some kids had gathered, and holding his guitar out so they could play it, which I'm sure was very exciting for them (hell, that would be very exciting for me).

The next part was one of my very favourite parts of the whole show. They played "Older," of all things. YES, a song that has the whole point that "YOU'RE GONNA DIE!" Well, kids gotta learn about their impending mortality some time, I suppose. (Apollo, on the phone after: "And who better to teach them?") I mean, ok, I get that the idea of playing it for kids is that kids are concerned with how they're growing up and all that and that they probably just think of it that way, but still, doesn't change the fact that the song is really "YOU'RE GONNA DIE."

It was particularly funny to me because right before the show I was thinking about how I've heard people say "Oh even before they did the kids' albums their music was so great for kids!" and I'm like "Um...you know that like all their songs are about death and crushing despair and such, right?" Of course, I did rock out to Pink when I was five, so maybe kids just aren't paying attention to the lyrics (and neither are their parents, apparently). A lot of the songs do sound happy, after all.

Also during "Older" their were CONFETTI CANNONS, which really surprised me because I didn't know of them using those since "James K. Polk" years ago. The kids loved it--they were all running around scooping it off the floor and throwing it at each other or dumping it on themselves.

JF: And now we have a very special guest, coming all the way from the back of the stage to the front of the stage...it's Danny Weinkauf! JL: He's a guest, but also he's the host. A guest-host.

Before "I Am a Paleontologist":

During the song John was doing the "Is it a (name of a dinosaur)?" part, but they were all either super-obscure dinosaurs I'd never heard of (WHICH WOULD BE HOT COS HE'S SMART ENOUGH TO KNOW THEM) or ones he was making up (WHICH WOULD BE ADORABLE BECAUSE IT'S SO SILLY). One of them ended with "pod" and for the next one he said "Is it an iPod?"

Before "One Dozen Monkeys":

JF: I wrote this song when I was eleven years old...and when I was a girl.

After that was the Avatars.

Green: WE have been here for many of your earth years, and we have learned your ways. Blue: This song is about traffic safety. For children and adults, because we've noticed many adults are ignoring traffic safety laws in Los Angeles. This song comes to us all the way from the New York Department of Public Safety. It is by a composer named Vic Mizzy. He was famous for the themes to The Addams Family and Green Acres. Green: If any of your children are old enough to remember. Blue: He was a master of repetition. Green: He was a master...of repetition. Blue: (something I didn't catch, sorry!) He was a master...of repetition.

When he asked that last question John was shaking his head and it was SO ADORABLE.

JF: This next song is from a simpler time. It doesn't go up to nine. It stops at seven.

So then of course they did "Seven" and I was SO EXCITED because, while John had disappointingly only been a little spazzy on his singing-without-playing song ("Icky") the night before he was very spazzy on this. THE BEST.

JF: I found my robot voice. JL: I'm glad you found your robot voice. JF: I can't hear you. Where's your voice? JL: I have an ordinary human voice. JF: I want to tell you a joke that's been going around the robot community. I don't know if you know, but robots spend most of the time sitting around waiting for things to happen, so there's lots of time for telling jokes. This joke is a little complicated, because it uses big words. Today's big word is "hipster." Some of you parents may not know what a hipster is. Here's the joke. Why did the hipster burn his mouth eating his pizza? JL: I don't know the answer to that, Robot Flans. JF: Well, you're lucky that I know the answer. Because he ate it before it was cool...So we robots like to work on making super-groovy music. This is a song that starts super-quiet and ends incredibly loud.

So then was "Robot Parade," and there was more confetti. Now, when they had it during "Older" it was a normal, reasonable amount of confetti--like when they used to do it during Polk. But this time it was just an insane amount of confetti, going on for a long time. I could see Flans over on the side of the stage and it at least looked like he was controlling whatever was sending the confetti out and I was like "GEEZ calm down Flans." But it was really fun of course, especially for the kids. After he said "Those robots love confetti!" and I was like "APPARENTLY."

Then Marty came over to center stage. Flans described him as "the guy in the not-quite-as-red pants," because Danny was wearing his signature red pants. Flans said everyone should take cell phone photos of Marty and tweet them to him because "he's working on his modeling portfolio." Then he said this was one of their most successful songs "on Disney Records--and as you know, when the Mouse hears a hit, the Mouse roars."

Marty did "Alphabet Lost and Found" and collapsed onto the stage when he was done. He was being quite animated during the song so maybe it wore him out, haha.

JF: We are starting a Kickstarter to make a feature film twice as longa s this show composed of jsut photos taken at this show.

Kids were throwing confetti at the stage and Flans said, "When you've played in bars as long as we have, it gets scary when people are throwing stuff at the stage."

When they came out for the encore Flans said they'd had a costume change. He was wearing a construction hat and at first I just saw him so I thought it was just him, but then I realized it was the whole band, MEANING JOHN TOO, AND OH MY GOD HE WAS SOOOOOOOOOO FUCKING CUTE. I mean he's so ridiculously attractive to begin with that it always seems impossible that anything could happen to make him even more, but yeh, sometimes it happens, somehow. Anyway, yeh, I don't even know what the construction hats were actually about, because they had no relevance whatsoever to the songs they played--just being silly, I guess. SILLY AND CUTE AS FUCK.

Then they did "Cowtown," which was another interesting choice for kids, but a fantastic song of course.

Then, Flans said that they had stickers for everybody--that they had a thing that was supposed to print ten, but by mistake had printed 10,000. "There is one rule for these stickers--you can't put them on your face. When we got them we were so excited that we put them on our faces. Don't make the mistake the band did."

They closed with "Alphabet of Nations," which meant more QUALITY JOHN SPAZZING. YAY.