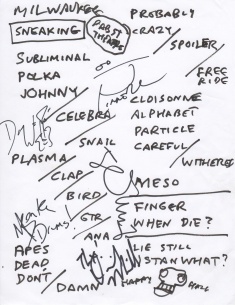 My fourth show now, and probably my favorite. Lets get a couple of memorable quotes out of the way:

"They Might Be Giants: Delivering disappointment since 1982." (Flans before Why Does The Sun Really Shine?)
"We're not going to teach you how to clap your hands, people. We don't have that kind of time!" (Flans during the The Future Of Sound break of The Guitar)

The whole band appeared outside of the venue following the show, so I was able to get a set list signed by all five of them (Danny was the last to sign it, and when I told him this he was shocked. "Even Linnell?" Yes, even Linnell), as well as a signed drum head from Marty and a picture with Linnell. You can see the photo album with all of these here.

Thanks for making me wish I stayed longer. :P You should scan that setlist (or at least take a slightly clearer picture) and <a href="/wiki/index.php?title=Special:Upload&wpDestFile=2011-10-28b Setlist.jpg" target="_blank">upload it</a>! — minrice2099 (talk|contribs|shows)
Uploaded! Check it out at the top of the page. Don't know where else it should be put around the site - I'm new to this wiki-ing thing. - KristenDee
That's exactly where it should be; don't worry about putting it anywhere else (well maybe on your user page, but that's up to you...). By the way, I was that tall guy standing behind you for most of the concert. I think I audio-bombed some of your recordings (e.g., Alphabet of Nations); I think I can hear my voice. Sorry about that! XD — minrice2099 (talk|contribs|shows)