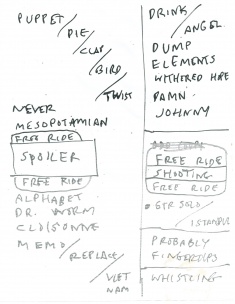 This show included the first live performances of "When Will You Die" and "Spoiler Alert".

My ninth TMBG show, and my third TMBG show at the Chameleon (it's actually been almost three years since I saw them, which was the last time they came to the Chameleon. Yeesh!). Performance during the show was good and rocking, and the banter was good as well. Highlights for me were We Live In A Dump, one of my favorite TMBG songs which not many other people seemed to recognize and seeing The Avatars Of They for the first time. The new songs were pretty good live, although a couple of them don't seem like they'll have as good of a life in a live set, especially Spoiler Alert. I was actually planning on getting Join Us at the show, but they didn't have it for sale! At least not that I saw, I just saw The Else and Here Comes Science. I almost forgot, another of my favorite things was that Flansy dubbed the show the 'Fit Too Much Shit on the Stage Show' or something along those lines due to so much equipment on a somewhat small stage.

I had so much fun at this show, despite a rough start. Standing in the 100 degree hallway was torture and the staff was a bit rude, but once everyone was actually in the club, it got much better! It was great to hear songs from Join Us. I was so happy "Never Knew Love" and "When Will You Die" were played. Of course, hearing the old favorites were wonderful too, though I am surprised that "Particle Man" wasn't played.
Most importantly, I would like to give a special shout out to my mom (Goldie1028) and Johncbowerman. When a young man decided that he desperately needed the setlist during the first intermission from Linnell's keyboards and started pushing me out of the way to get it, they came to my rescue. Happily, the young man was kicked out and the setlist he stole was returned to its rightful place. To anyone else who helped as well, thank you.