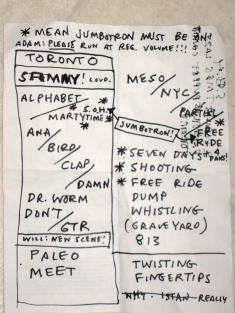 One of the best concerts I have ever went to. Flansburgh secretly created a setlist in alphabetical order (sneaky!). I even managed to get Flansburgh's autograph! Unfortunately, Linnell quickly left so I couldn't get his autograph.

Amazing show, full of energy and the dark skies never amounted to anything threatening. I asked Flansburgh for a photo, he let me hold his coffee instead while he signed autographs. I'll take it! Come back to Toronto soon!

It was a gloomy day but thankfully the promised rain never materialized. The band took the stage promptly at 2 and played for an hour and a quarter. It was a fun show. What a shame that this was only the second time in nine years that they've played Toronto.
The intro to "Free Ride" was played at both ends of the "puppet content".

The first TMBG show for my wife and myself, and it was amazing! The government-required puppet content was hilarious, and the band sounded great. I even got Flans to sign the poster I made for the concert (The poster design | The signed poster). Can't wait until the show in Rochester!

Great show, and both my kids had a good time. The only thing that sucked was that it was hard for the kids to see because the first four feet were adults, so I had to do a lot of lifting to keep the kids happy.