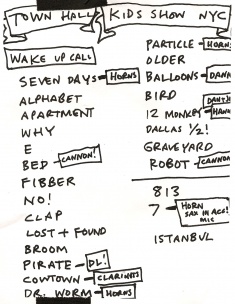 Happy 420 everyone! TMBG did 2 shows the previous night in Albany, left there at 3AM and were due here at 7AM, so they were playing on almost no sleep, but appeared to be more stoned than tired. Lots of bizarre behavior on stage today - the funniest moment was Flansburgh playing a marching drum for Particle Man, and starting a PSA about how people shouldn't fight and instead should talk out their disagreements. For once, it was actually a kids show that lasted longer than 80 minutes. I had front row seats, but there was a crate totally blocking my view of the horns. I never even knew when they were on stage unless they were playing. In the interest of the "holiday", Moofy & I spent most of the show noticing just HOW MANY TMBG lyrics could be interpreted as being high, or other drug references. I also realized that some of the songs on 123's are actually very good - I was RRRRRing and MATEYing during the Pirate song, and Road Trip is an amazingly rocking song.

My son's first concert, and I made sure that it wasn't going to be Barney or Disney on Ice. We had a great time, and I was glad to hear that my "adult" favorite Why Does The Sun Shine? was on the kid's setlist.

I brought my wife and three kids (they're 8, 7, and 4 years old) to the 1pm show and had a great time. As a bit of a background, I was a fan of Lincoln and Flood when they came out, and got back into TMBG once they started the 'family' stuff with 'No'. The kids love both the family albums as well as their regular music.

The 4-year-old's favorite song is "I Never Go To Work" so that was a great beginning. He also really liked "One Dozen Monkeys" and "Seven". The 7-year-old's favoites were "Apartment 4", "Doctor Worm", and Marty's energetic lead-singer antics on "Alphabet Lost and Found". My 8-year-old liked the whole show, but complained that Flansburgh's falsetto renditions of the scientific facts in "Why Does The Sun Shine" was 'weird'.

Then we went to lunch in a local 'family-style' Italian restaurant and who gets seated 15 feet from us? John Flansburgh and Marty Beller, with a few other folks and a 2-year-old. I smiled and waved one of the foam hands at John, and he gave me a kind of pained smile, Marty had his hands full trying to eat with the 2-year-old in his lap, so we didn't bother them during their lunch.