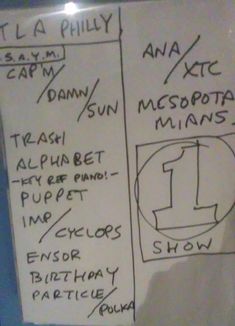 So... that's a wrap... see you all at the Beacon and beyond. The final show of this leg of the tour was a pineapple of fun, a veritable cornucopia of glad tidings and good fellowship. I can't remember a show where the band, crew and audience were smiling so hard for so much of the show.

If you looked into the eves of venue you saw the crew, dressed in white body suits, dancing up a storm and clapping along with the tunes. Although, I suspect that the empty case of bubbly that I found after the show added to their reverie.

Before the Coffee Break -

Here the band played as a band and did a fine selection of band songs. Flans laid down a Michigan rap that is one for the ages. If I remember, I'll post it as the sample. Great song selection - lot's of new and old stuff to please even the most discerning of fan.

Here, DJ Neil - formerly our monitor engineer, now on the road playing with Steve Earl, put together a fine mix of tunes to entertain and delight the senses. This is not part of the recording, just thought it was interesting.

The Tricerachops Horns join the band for a second set of really great sounding music. What's incredible with working with actual professional musicians is that everybody's game gets elevated. We sound great, the horns sound awesome, hell, even the audience sounded better with the horns. The TLA Venue song is performed complete with improved choreography and we move on from there to play a huge sounding set of molten rock goodness. The set flew by and I can vaguely remember sitting back and really enjoying the sound that was around me. Sometimes, when you do a lot of shows you forget to listen to the overall sound and focus in on what your doing. It's not a bad thing; it's just something that many musicians do. I was really psyched to be able to lose the in-ear monitors for a bit and revel in the glorious, organized chaos that surrounded me.

A fantastic show in every sense, and defintely better than their last TLA show. Most of the second set was just like a big party, especially during The Guitar and Spy. The horn section was fantastic and incredibly professional, and the variety just astounded me. Excellent choices, TMBG.

This is my first TMBG concert, and my first concert ever, and it was everything I had wanted it and more! Right off the bat, they started with my favorite song, The Cap'm, which caught me off gaurd so badly. The crowd was awesome, I got into conversations with people I didn't know. Which is a rarity for me. The greatest part was the final few songs of the concert. Marty going crazy on the drums. Everyone is praising him, bowing, screaming. And the encore.... Simply amazing. Miller is an excellent guitarist, I didnt realize how good he really was until this day.... It was perfect.

What an amazing show. It's always a treat when there's a brass section involved in a live show.

F'in' astounding performance. This was a really big day for me because that morning, I proposed to my girlfriend (who said yes!) We shot down to Philly to see some of her friends and proceeded to the TLA for They Might Be Giants, and were shocked to see that it was a double set! The horns were fantastic, and they played possibly the best setlist I have ever seen from them: Puppet Head, Ana Ng, Mr. Me, Birthday... all in the same show?! Totally incredible, the perfect ending to a perfect day. Looking forward to the Beacon in February!!!

Favorite line of the night, from Flansburgh (paraphrased): We're thrilled to be back at the Theater of the Living Arts, also now known as 'The Fillmore' to people who have no idea where they are."

Also of note, to nobody else but me: This is probably the most alcohol I have ever imbibed at a TMBG show. Sober enough to still be "in the moment" and enjoy every minute to the fullest, but I will admit I was feeling pretty good. I was celebrating after all!

I was so excited when I heard there would be horns at this show! There were two sets, and the first set was just regular. So I was like, "Oh well, guess there’s no horns, but at least it’s a two-set show." And then, in the second set - out walked the horns! So it was totally totally awesome! Even some songs that are not usually my favorites became tolerable with the addition of the live horns.

I never thought it would happen, but a show has finally replaced Baltimore '97 as my favorite TMBG show. Two sets, the second set with horns, and a perfect mix of old and new songs. All of the guys in the band's crew wore white Tyvec jumpsuits (do they do this every night??) Linnell was wearing his red shirt from the "F Is For Fun" video on Here Come The ABC's (which is probably the first time in 17 years of show-going that I've not seen Linnell in a pocket T-shirt). Linnell was pretty quiet all night, leaving most of the banter to Flans, but he seemed to be having a pretty good time. Everyone played excellently, especially Flans, who can sometimes sacrifice his guitar playing while rocking out. The three piece horn section was stellar during the second set. My only complaint is that they didn't take advantage of the horns to play "No One Knows My Plan" (you could tell the crowd was in the mood to conga!).

This was also the show of NEIL! Halfway through the second set, Neil, the band's in-ear monitor tech, started talking to the band after a song. Flans stopped the show to point it out and the guys wound up having a little coversation with Neil in the middle of the show. Afterwords, they had Neil come out and introduce himself to hearty cries of "NEIL!!" Flans gave him a set of sleighbells to play during "The Guitar" and Neil came out on stage to play the bells during the conducted improv section of "Spy."

After the show, Marty came out for high-fives and gave away his drumsticks. The crew guys were handing out setlists, and Neil gave one guy his Tyvec jumpsuit! We stuck around for awhile hoping more guys from the band might come out, but alas, it was not to be. Nevertheless, this was hands down, the best show I've seen from TMBG in the last five years.

Without a doubt the best night/morning of my life. I ran out of people to take after my mom backed out, so I took my 12-year old cousin; I am very surprised he got in. Oppenheimer was actually very good, and I was tempted to buy an airhorn shirt. I knew it would be a grand show when they started with The Cap'm. I nearly died when they played PYHITPH. I sang to pretty much every song, and this dude was talking to my friend for, like, 6 minutes at the beginning. At the break, they threw foam fingers (I got none) and college-font window stickers (1!!!). The crew danced to TLA, and they GLOWED. To correct PhillyCrow, Neil played the jinglebells to Purple Toupee. Spy was hilarious, because of the random jingles when everything else was quiet. Istanbul was beautiful. I actually thought Marty would bust an artery when he was pounding the living crap out of his drums. Anyway, I bought The Else vynil signed, and got home around 1:15. Best. Night. Ever.

Also, I'm starting to think that half the attendees signed up last night to show they were there on this page. A bunch don't link to anything, and it was 17 before the show.

My first TMBG show and I couldnt be more impressed with the perfomance!! I sung to every song ('cept thier new "Philadelphia", duh)and was having a blast, jumping, yelling, and steppin' on the toes of others. Being with my favorite girl with the name Kristie just multiplied the whole experence (love that girl =D). After the first few songs, we didnt even mind being stuck under the iron stairs in the back-left corner. With out a second thought, the most fun We've had in such a long time.

This was my first concert, I went with my History teacher (who is of course, a fan because I asked him and he was quite ecstatic) I liked that I didn't have to wait in line, just walk right in, the opening act, Oppenheimer, was brilliant, but my gripes begin with the actual show. It started of with "The Cap'm", which is a great tune and later on, an improvised version of "Particle Man", and most of the first set, the second set is what bothered me the most because either, A: they performed a crappy song (The Guitar) or B: they took a great song and ruined it (Purple Toupee, Birdhouse In Your Soul, Whistling In The Dark). Though "Doctor Worm" was a great end, and the encore of "Maybe I Know" and "Istanbul, (Not Constantinople) was fine, for the first song, the latter dragged on for way too long, that brings me to another point, the band intros, yes indeed Marty is a fine drummer, but does he have to play for that long, while John F. yells at the top of his lungs?) Overall, it's a decent show that unfortunately fell downhill later on, but does have its moments. I give it 3% stars.