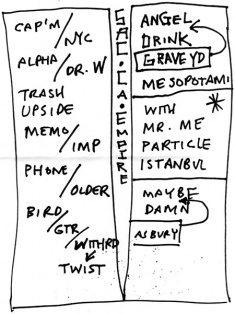 They Might Be Giants
— with Oppenheimer opening —
Empire Events Center in Sacramento, CA
September 28, 2007 at 5:15 PM

So, the Empire Events center apparently is usually a dance club ( an somewhat sleazy dance club featuring go-go girls according to the website), but upon closer inspection, appeared much like any other dark, warehouse like club.
This was also a shorter than usual show, probably due to the need to convert themselves back to the dance club, it wasn't even ten pm when the show finished.

TMBG opened with "The Cap'm', followed by 'New York City' and "Alphabet of Nations". Followed by, "Dr Worm", "Take Out the Trash" (with bass solo by Danny Weinkauf *squees*) "Upside Down Frown", "Memo to Human Resources" and "I'm Impressed" ;one of my favorites from the Else and it rocked live. I'm finding that a lot of the songs from 'The Else' sounded really good live.

Then came the multimedia "Phone Calls from the Dead" complete with slides. Tonights caller was Mr. Albert Sac, the alleged founder of Sacramento, Peanuts voice-over artist and inventor of a Mentos harvesting device. :P This lead into "Older" and then "Birdhouse", "The Guitar", "Withered Hope" "Twisting", and "She's an Angel". This had kind of an quasi-disco start, then went back into the usual song. I have to say, I do enjoy the experiments. Maybe a song isn't exactly the way it is on the record, but that's okay. It's good to see them play around with the music, too.

Next was the song I really, truly can live without, "Drink." It never was one of my favorites, but it's audience interactive, so there you go. This was followed by "The Mesopotamians",which has become an earworm for me recently.

Then the band returned with the Velcro horns, "With the Dark", "Mr Me" (which I have never heard live and then "Particle Man" and "Istanbul"

John and John came out alone to perfom "Maybe I know". I've only ever seen them with a band, so it was fun to see them go back to their roots of just the two of them for a few minutes. Then they finished up with "She's Actual Size."