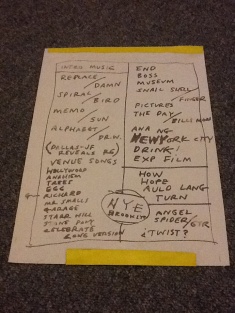 The show went off without a hitch. Wouldn't it be great if this were true. Unfortunately, we had hitches a go-go. Finally joining the electronic world (three of use still use gas-lighting), we used a digital console for the first time. For those not in the know, these are the latest in audio technology, supposedly doing for audio what the plough did for farming. This NASA looking piece of gear was gleaming in its sparkly chassis with lots of blinking lights and self-moving sliders. I was most impressed and looked forward to hearing ourselves in digital splendor that goes well with a glass of 2006.
Much like NASA, the board proved to be a fine piece on paper, but not in practice. Those who were there, and close enough, can perhaps remember the desperate pleas from the band towards Will our monitor engineer. Almost supplicating, we offered him our first born, anything to stop the sonic bombardment that was shredding our ears. I'm guessing that there was an aggregate 20% hearing loss by the boys that evening.
We walk off stage after struggling though the set, and sit, somewhat dejectedly in the dressing room. Dreading the battle that is the second show we consider going without monitors... perhaps without our ears. A whole gig by Semaphore? Not a terrible idea compared to what we'd just been through. Ever the scrappy band, with pluck to spare. We pull ourselves out of the funk, hit the stage between shows and see how we can help fix the audio monster that is this digital board. The crew, best in the business, were already busy at work on the issues. The problems disappeared during the second set, so someone did something right. Personally, I think it was me berating the console to 'stop yelling.'
Why am I putting all of this on the record? Because in the back of my mind I'm thinking, "can't put this one out". Both for technical and performance issues, I was sure this was one show destined for the scrap heap. At one point in the gig I swear I was picking up the show from next door in my earphones. Imagine my pleasure when listening back, the show sounds GREAT! Solid performances by the boys and a good sound to boot. A really diverse set list, the songs covering a couple of oldies from the first albums (The Day, Hope I get Old), all the way up to the latest single. The Johns voices are in fine form for the duets and they start the New Year running with a few classic raps (check the sample section). Of the two shows, the second was my favorite to play, but this one is way better to listen too. Enthusiastic crowd exemplified by the guy screaming for specific songs the entire set, especially during the playing of other songs. It pleases me to no end that at no point did we play his requests.

The show was great, as are all TMBG shows, but Northsix sucked. I wouldn't go back there. Maybe I just expect too much from rock clubs, but it was way too tiny for the number of tickets the sold, the bathrooms were gross, and if there had been a fire, we'd have all died.