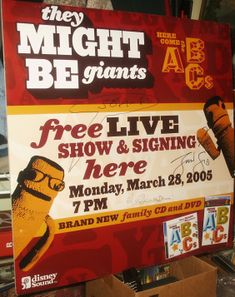 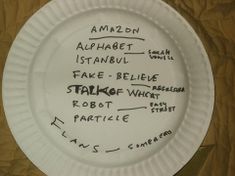 Setlist: (Paper plate setlist doesn't exactly match up with what they played.)

After having seen TMBG play amazing shows, this one made me cringe. With just the Johns and a drummer, it was bare-bones, but when combined with the fact that they were promoting their album "Here Come the A-B-Cs" and the massive outpour of young couples with screaming little youths, it was a supreme suckfest. Flansburgh was on bass most of the time with Linnell on accordion and the drummer just a little to spastic to be playing TMBG material. The show was mediocre at best, with children's songs being played by only three men with less than six strings between them.

The Johns were also uncharacteristically rude for some reason. When I didn't have merchandise for Flansburgh to sign and just asked for him to sign my tee-shirt because I hadn't thought ahead, he wrote "NO" on it and called me a deadbeat. At least Linnell signed it, but he sort of dismissed me when I tried to tell him he was the reason I had learned how to play the accordion.

There have been four (!) TMBG shows in Seattle since I moved here in 2003. Finally, I get to see one. They were here to promote Here Come The ABCs, so the show was family-oriented. (Although at one point Flans said to make sure not to stand too close to a speaker stack, especially if you had kids, since the show was going to be loud because "kids like volume.") When They came on stage Flans opened with "We've been trying to find Easy Street for years!" There was the usual intro banter and a bunch of playing around with the instruments, probably to check to see if everything was in tune or whatnot. Then the show began. See the setlist.

Afterward they waited around to give EVERYONE autographs (they're probably still signing right now). I was lucky enough to get Linnell to sign my liner notes to They Got Lost (Flans had signed them at the Park City, UT show in 2002 where I bought the CD). Flans signed my Unsupervised liner notes and handed them to Linnell, who turned them over a couple of times and then handed them to the wrong person without signing. I got them back. Marty was signing autographs at the other end of the store and I was going to have him sign, but I didn't bring anything he had played on. I momentarily thought of having him sign a dollar bill that was in my wallet (since he is "the next President of the United States"), but he left before I could get to him.

Sorry I couldn't bootleg it. I don't have recording equipment.