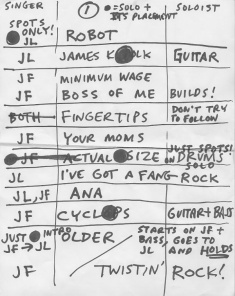 Review by chimpoo: This was the first public performance ever of Women and Men which the band had been practicing in anticipation of the upcoming Flood show they were doing in New York. Unfortunately, the performance was marred by a shrieking, ear-piercing whistle that came over the PA causing everyone in the audience to clasp their hands over their ears. Linnell promised the audience it would never happen again. However, a few songs later, during It's Not My Birthday, it did happen again and was so bad it caused the band to stop playing. Flansy then left the stage to find out who was responsible. The rest of the band started the song over again without him. Another memory I have of this show was of a hippie-looking fan with long hair climbing on stage and dancing around behind Linnell during Ana Ng. This made Linnell extremely visibly uncomfortable, though he continued playing. Flans then approached the fan and said "can you please get off the stage?" It prompted a humorous but sincere rant from Flansy afterwards about audience members dancing on stage and how the band had been injured by them in the past. This show also featured one of the few live performances of Your Mom's Alright with Flansy on vocals.