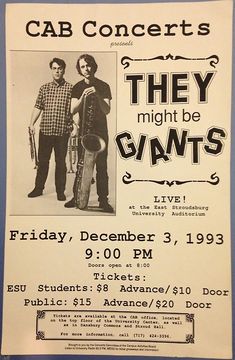 The guys in the quirky pop group They Might Be Giants looked pretty normal when they played last Saturday at East Stroudsberg University. Wearing jeans and T-shirts, they exuded the All-American boyishness of Dennis the Menace or that tiger-totin' cartoon character Calvin. Their music and lyrics, however, had more in common with that psychotic cartoon character, Zippy the Pinhead.

In bratty, Pee-wee Herman "I know you are, but what am I?" voices, band leaders John Flansburgh and John Linnell crooned about "whoopie chairs" and "silly space ships" and the experience of seeing the ghost of a dance instructor play the xylophone while performing "an interpretive dance."
TMBG's music can be frenetic like punk (only nerdier). And Flansburgh and Linnell can toss together elements as diverse as Parisian tunes, Jewish folk music, jazzy riffs, Edgar Winter-style rock, cartoon theme songs, television commercials, "The Three Penny Opera," polka, zydeco, tango, big band, soft shoe, and what they called their "bitchy cocktail music thing."
The songs' common denominator seems to be a playful, child-like sensibility -- as filtered through people familiar with hallucinogens. One of TMBG's songs, "Why Does the Sun Shine?," which Flansburgh and Linnell say they pulled from a 1959 "Science Songs" record, explains that "The sun is a mass of incandescent gas, a gigantic nuclear furnace." The words are probably the same ones they heard while squirming in their first-grade seats, but the music now is twisted and deranged. In one song, the bespectacled Flansburgh let members of the audience run their fingers over his guitar -- and it fit perfectly into the bizarre sounds the band was playing.
TMBG songs often run the danger of being too gimmicky, but they sounded less so at ESU than on the band's early recordings, which relied on little more than an accordion, a few oddball instruments, drum machines and sampled sounds. At ESU, Flansburgh and Linnell were accompanied by a percussionist, a horn section and a keyboard player, giving the songs a fuller, more danceable sound.


The 700-plus kids in the ESU auditorium were in tune with wacky nature of the music, and bounced up and down to the beat like popcorn.