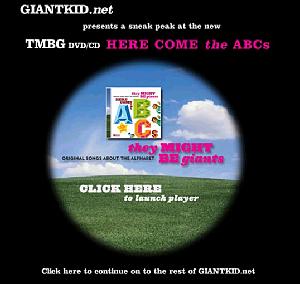 Last front page, around the release of Here Come The ABCs.

giantkid.net was They Might Be Giants' website aimed at children. It featured previews for all of Their pre-Here Come The 123s kids' material: No!, Bed, Bed, Bed and Here Come The ABCs. In early 2010, the registration on the domain lapsed, and for a time the site was down. The band reestablished it for a while, but in 2016, the site seems to have been abandoned. 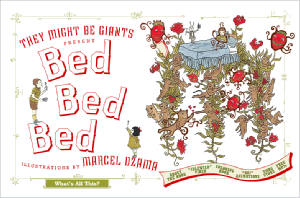 When the book Bed, Bed, Bed was released, the site featured a design by Marcel Dzama. It included a video for "Idlewild" and a print-out coloring book. After the ABCs-themed redesign, the site remained accessible via the main page. 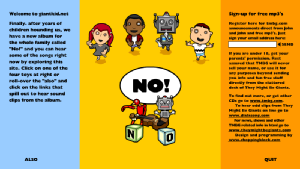 To promote their first children's album, No!, TMBG put together their first revision of giantkid.net. The site featured designs by The Chopping Block and four of the animations that were included on the enhanced CD. This site remained available through the next two revisions of the site from the Bed Bed Bed page.